Tokyo Day 15: Our last full day in Tokyo before returning to Singapore.

Can’t believe two weeks flew by just like this. While we did go to a few places, I do think we could do better if we have set aside more time and effort to plan our itinerary. Hopefully, we will do better the next time we come to Japan!

So on our second last day, we decided to allocate our day to finish up all our shopping. That include picking up bits and bobs that my sisters requested. First stop of the day was to Harajuku to help my sister to get the Anello backpack! 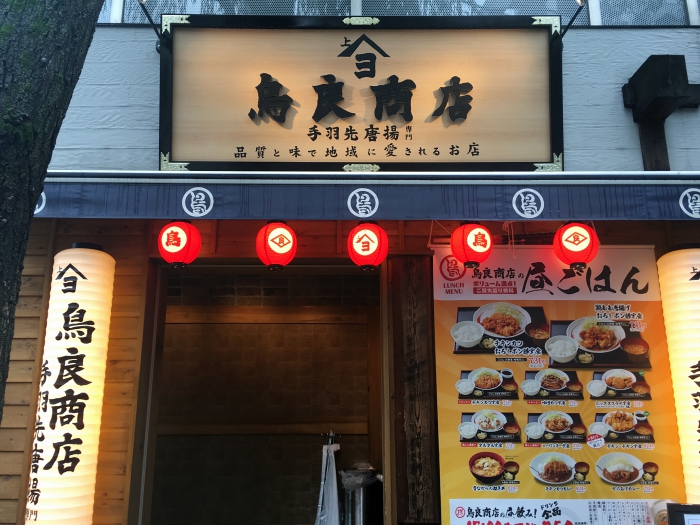 But before we even get to that, the fiancé and I decided it’s far more important to have our lunch first. Stumbled across this Japanese restaurant in one of the streets in Harajuku and decided to settle our lunch there. 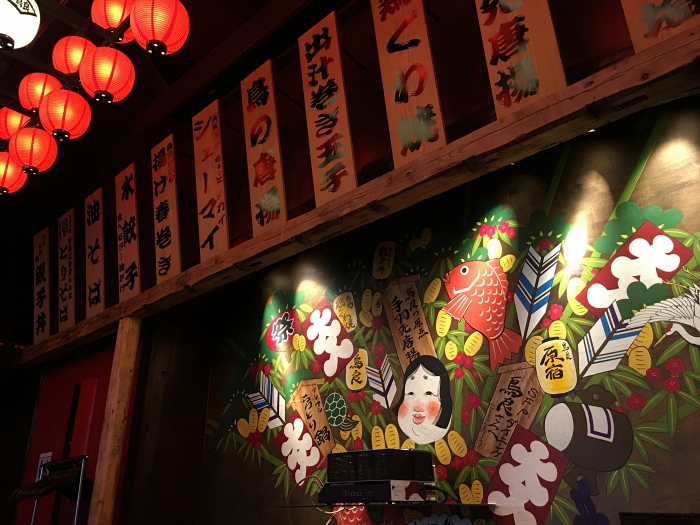 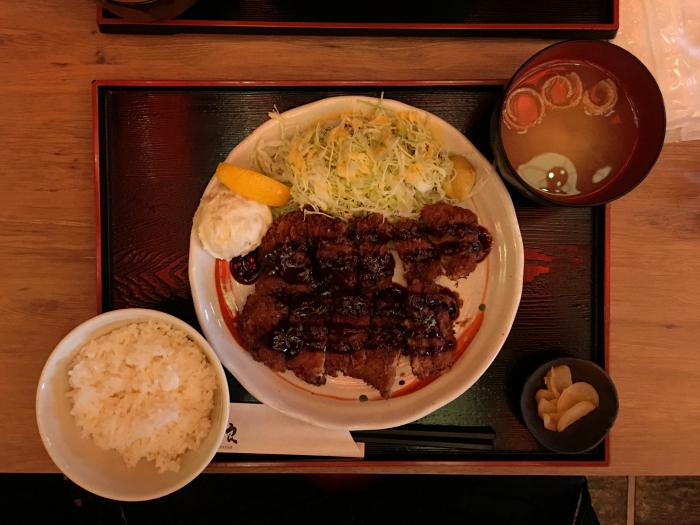 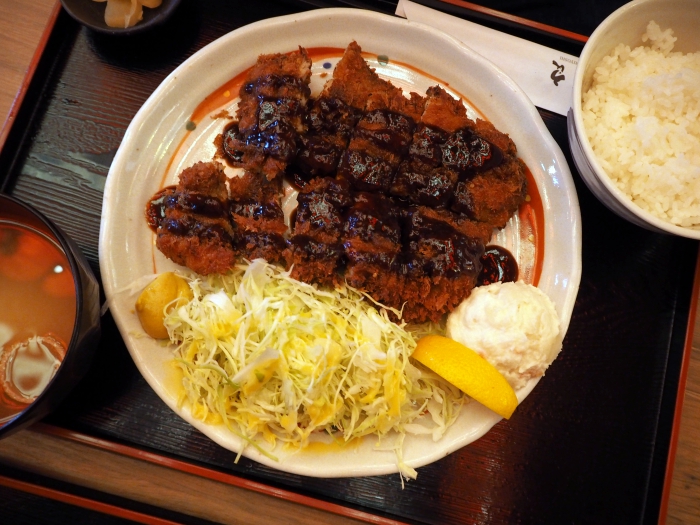 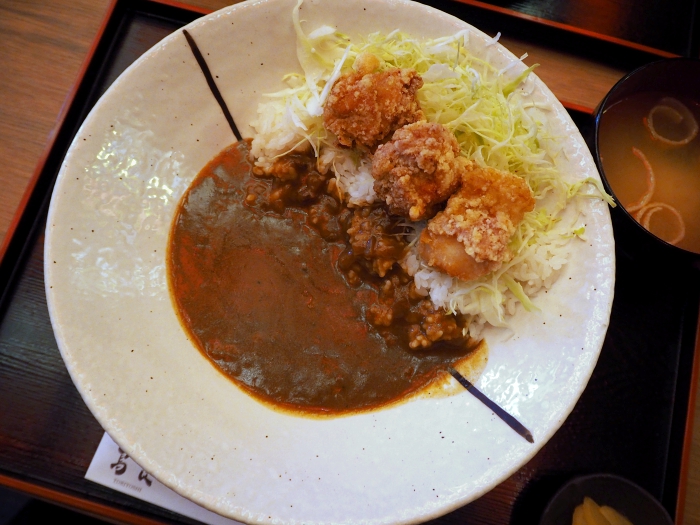 I honestly can’t recall how the food taste like, but generally speaking, I don’t think there is any ill-tasting food in Japan? Plus, we are not fussy eaters (I believed) so as long as the food don’t taste off, I think we are good.

After lunch, we then head back to Takeshita Street to get the backpack my sister requested. There were a number of shops carrying Anello bag on Takeshita Street, and I tried (to my best ability) to find a decent looking store to get the backpack. While the owner claims that the bag was original, I decided to countercheck with the info my sister provided just to ensure I bought the authentic one. Would be silly if I bought an inauthentic bag from Japan back to Singapore.

According to my sister, one way to check the authencity of the bag is by looking at the button. The original one should bear the wording “CARROT CO”. While I’m not an expect in differentiating a fake from the real, I do see bags (from other stores) that don’t bear the wording on the button (and selling at the same price). Since I’m not the ultimate consumer, I took pictures for her to make sure that’s what she want before I made the purchase.

One of the other reason why we decided to head down to Harajuku is because the fiancé wanted to get new shoes. Unfortunately, after walking up and down the streets, he still didn’t spot something he like. (Why am I not surprised?!)

One thing about this guy is if he didn’t like the item 100% or 90%, he most likely wouldn’t get it. I always tell him I hate going shopping with him especially when he’s the one wanting to get something.

Leaving Harajuku, we then took the train to Shibuya because he wanted to go to LOFT to check out their bag section. We also went to Tokyu Hands, but ended up leaving both places empty handed.

Then I decided to go to the nearby departmental store since my sister asked me to get her the BAO BAO Issey Miyake bag (that I previously spotted at Takashimaya Shinjuku). Took us a while to find the departmental store. When we finally reached, instead of going to the Issey Miyake counter, we got attracted to the PANDORA counter and I ended up bagging home a charm and a weaved bracelet. There was a 20% discount given for either the charm or the bracelet, so I ended up paying JPY12,400 for both items (combined). Not sure if they were any cheaper as compared to buying in Singapore. I just wanted to get something in Japan to remind me of the trip.

In the end, I didn’t even get the Issey Miyake bag from there because I remembered someone mentioned that tourist can get 5% discount at Takashimaya, so I decided to head back to Shinjuku and get the bag from there.

As it turns out, while Takashimya do offers 5% discount for tourists (need to first obtain the Takashimaya Shopper’s Card by showing your passport at one of the counters), certain brands, items and sale items are not subject to discounts. Issey Miyake happened to be one of those selected brands that is not entitled to the discount.

Since I’m already there and there’s no difference where I bought the bag, I just went ahead to get it from Takashimaya. 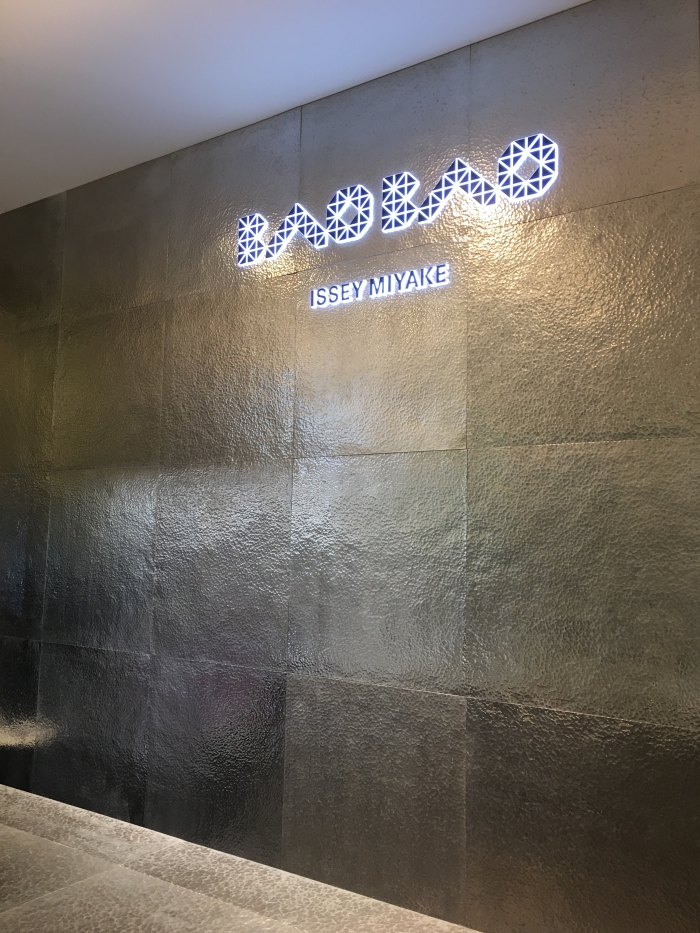 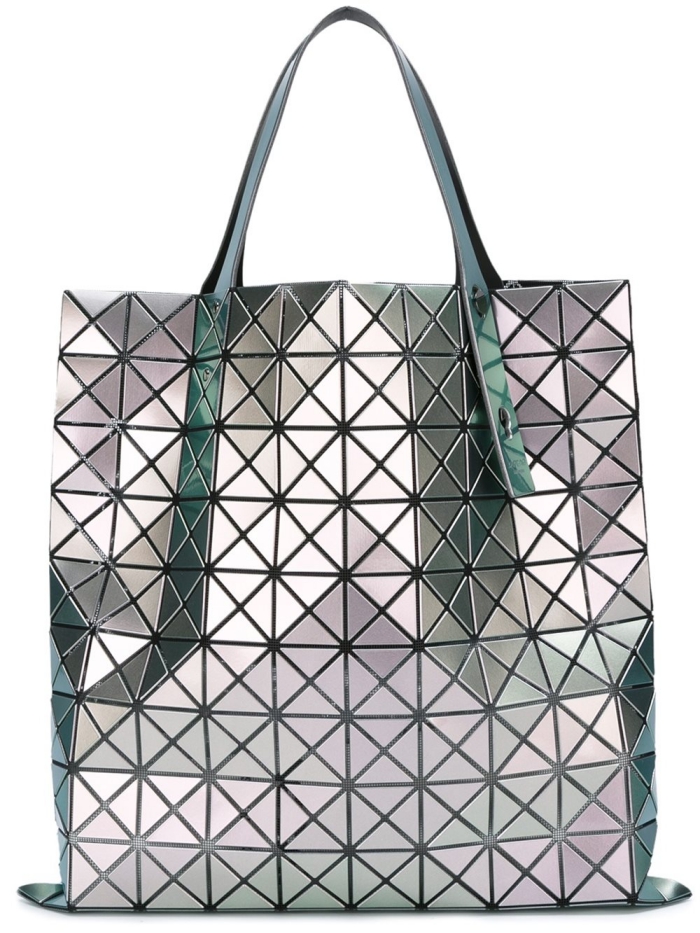 The colour she asked for is so gorgeous please. Even the fiancé said so. I was tempted to get one for myself, and surprisingly, the fiancé actually told me to go ahead and get it. Not to mention, the price was also significantly cheaper as compared to getting it online/in Singapore. (In the end I decided not to get the bag as I don’t see myself carrying a tote bag. So while it looks nice, I just have to be logical and said no.)

Anyone know if this “service fee” is chargable at all departmental store? I was wondering if I could save on the service fee if I have bought it from other stores. 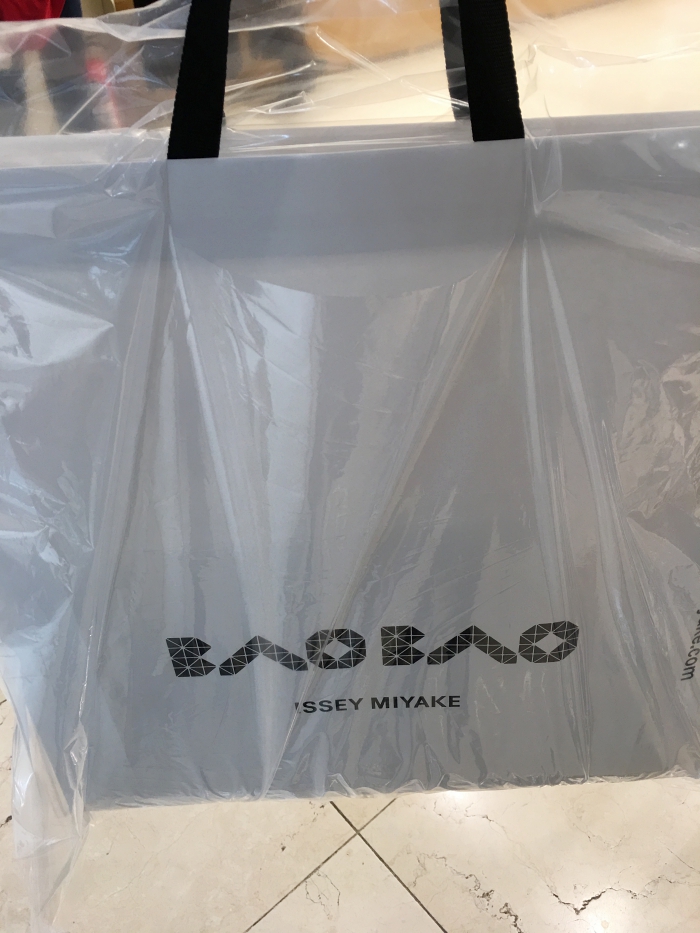 Was told there’s one year international warranty for the bag.

The previous time we were there, we met with a long queue so we told ourselves we would come back another time. Looking at it was our last night in Tokyo, it was either now or never.

Made our way down to the restaurant and immediately collect a ticket. Waiting time was estimated to be 60 minutes (acceptable), so we decided to walk around the area to pass time before returning again at 21:30 for dinner. 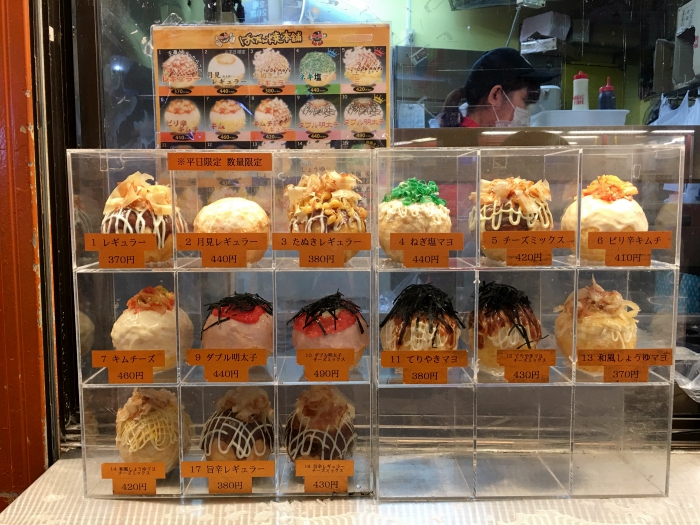 We ended up going back to get the giant takoyaki. 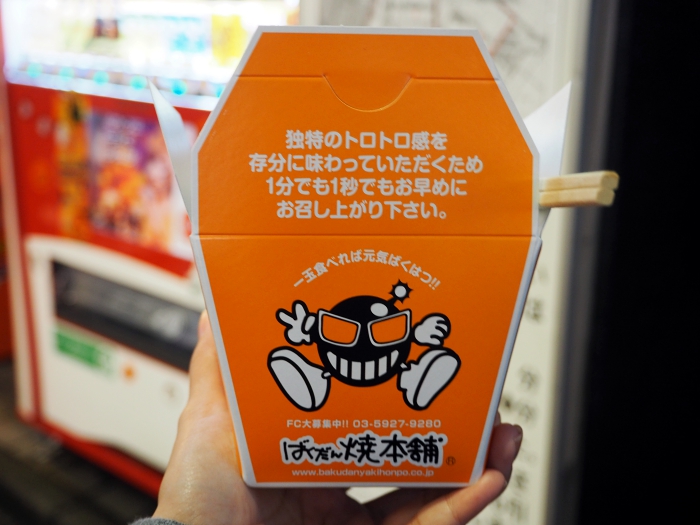 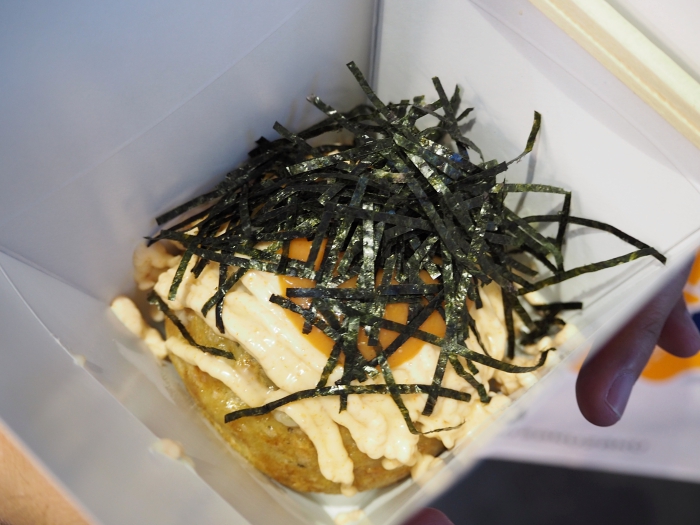 So nice and comforting to eat this in the cold!

Before we knew it, it was time to head back to the restaurant. We managed to get a table despite not understanding what number they were calling (the staff was annoucing the queue number in Japanese). The fiancé went over to tell one of the staff that we couldn’t understand Japanese, and was kindly told that they would call out our number in English instead.

How this “gaming sushi place” works is that every plate is priced at JPY100 and with every 5 plates, you are entitled to a chance to win a prize from the gachapon/capsule machine. There is a machine found above every table. 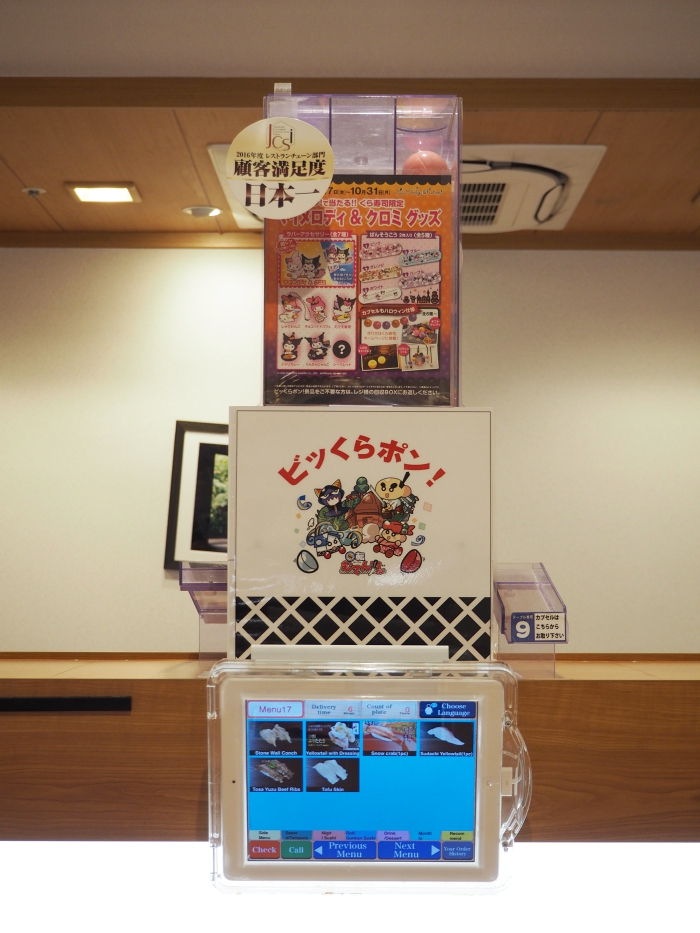 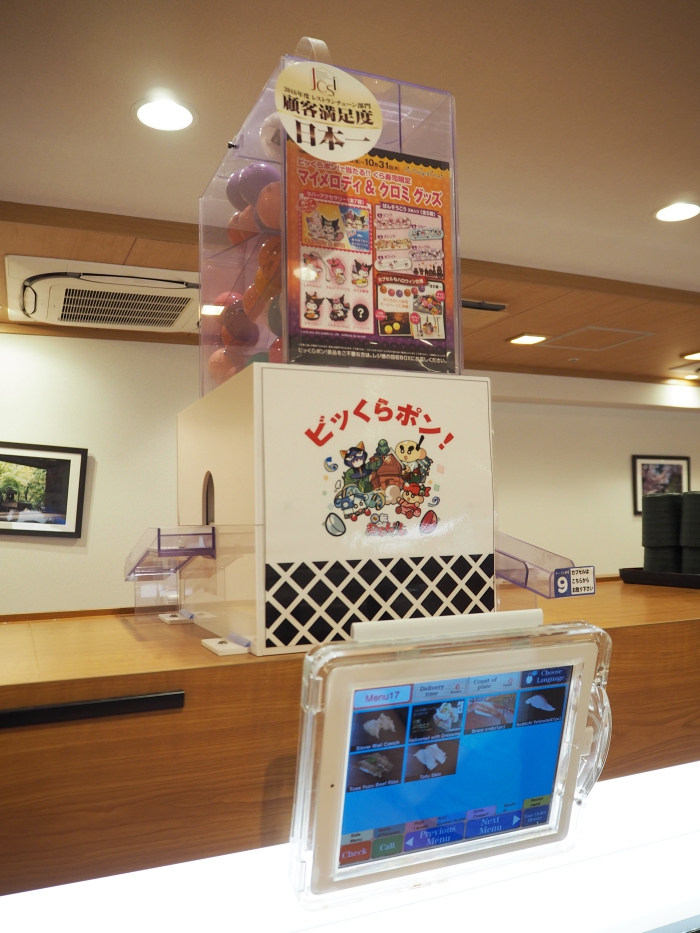 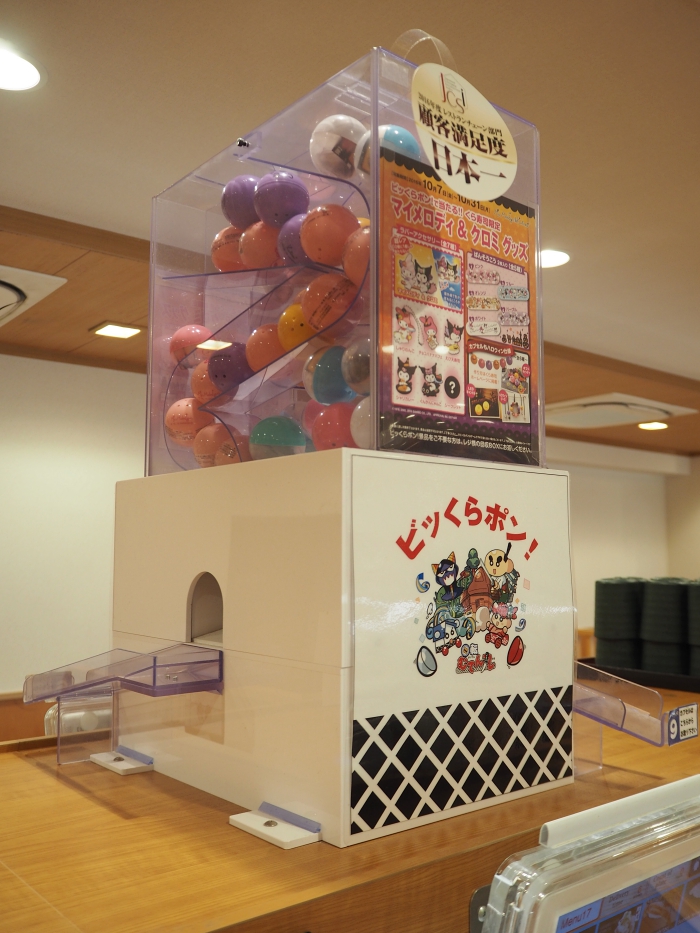 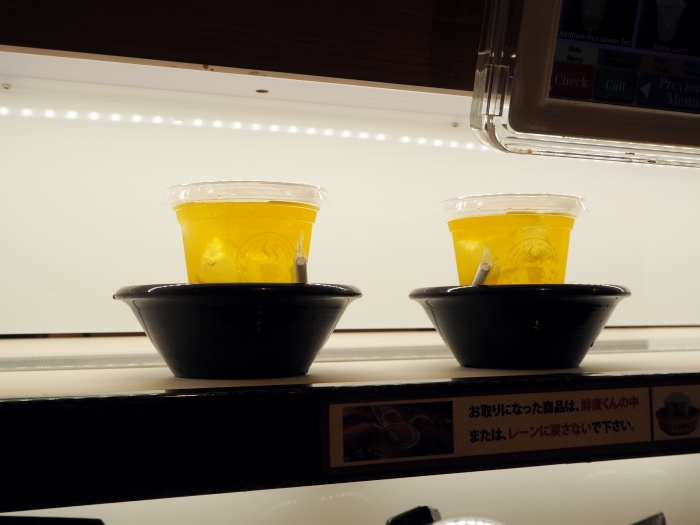 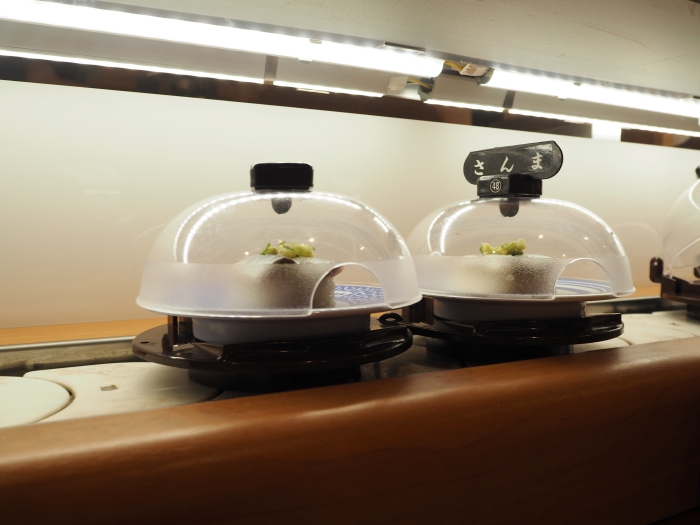 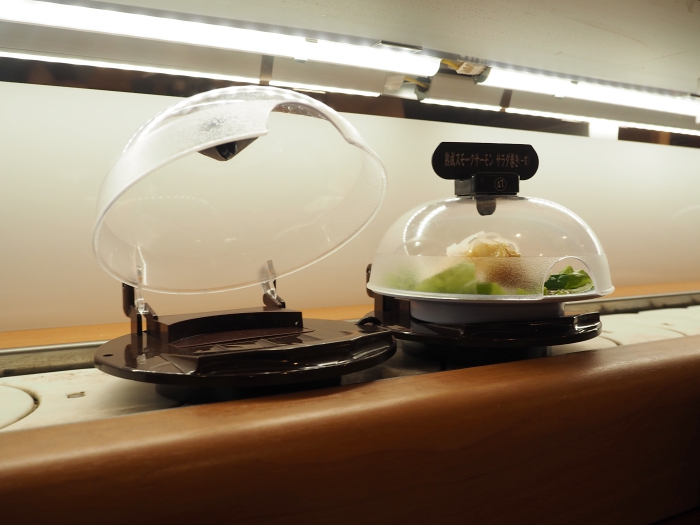 At the start, the fiancé and I had a hard time trying to figure out how to open the cover on the plate. It certainly took me a while before I managed to learn how to open it. It was stated somewhere but we just didn’t realise. 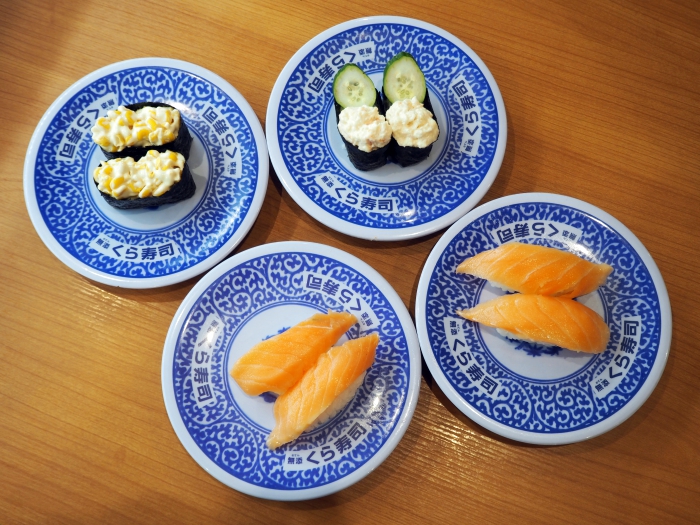 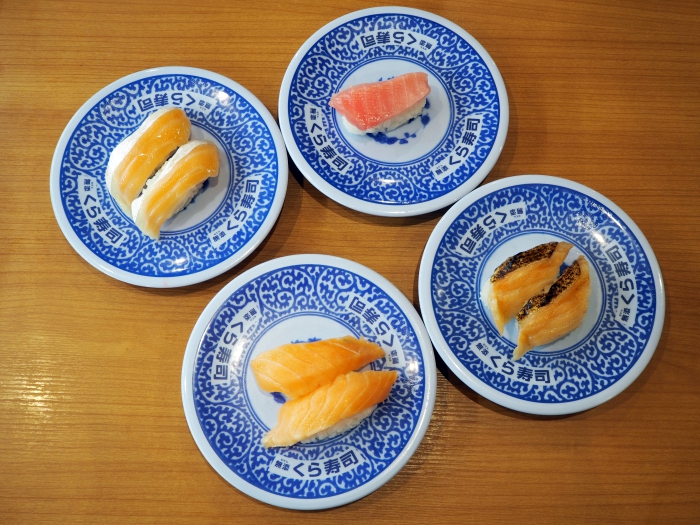 Their sushi certainly wasn’t as nice as the one we had a few days ago in Shinjuku. But at JPY100 per plate, I do think they fair better than the SGD1.50 sushi we get in Singapore (from Sushi Express). 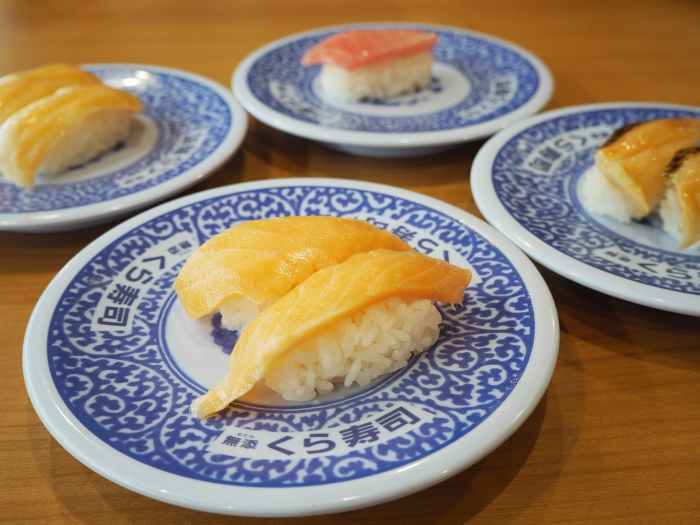 Initially, we thought it should be fairly easy to get the gachapon. 50/50 chance ya? We saw people from the nearby tables winning the gachapon and thought it shouldn’t be hard to get one. But guess what? We didn’t win any in the first three rounds. (By then we had already eaten 15 plates.) We only managed to get our first gachapon (our one and only one) on our fouth try, after clearing 20 plates of sushi. Felt cheated because it wasn’t guaranteed that we could get a gachapon with every 5 plates of sushi.

How it works is you have to drop the empty plates into the slot found at the side of the table. With every five plates you insert, the screen on the iPad will play a “game”/video, and from there you will know if you win or lose.

If you win, a gachapon will then drop down from the machine. Like this: 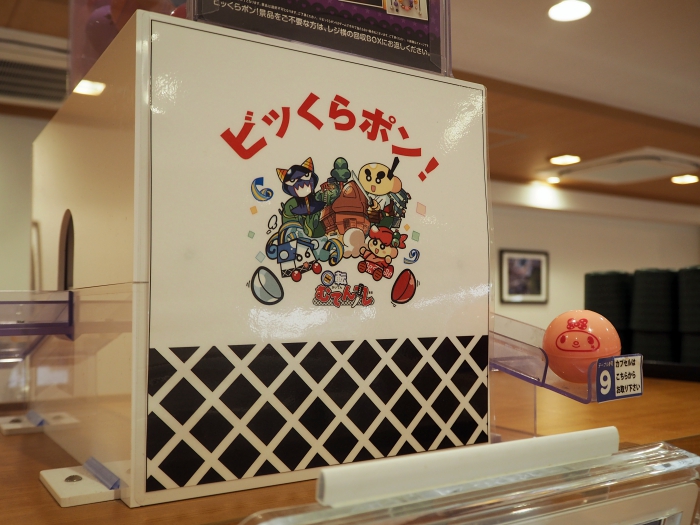 We really wanted to get at least one gachapon (afterall, the experience of winning the gachapon is what makes us want to dine there) so we just kept eating until we finally got one. By the time we hit our 20th plates, we could hardly stomach any more sushi. So thankfully, we managed to win one gachapon then and decided we would stop there.

The truth is, I was / we were honestly quite disappointed with our first experience at the gaming sushi place. And can you even guess what was inside the gachapon that we got?

I thought it would be some kind of figurine or key chain, but it turns out to be plasters with characters on them! Like what? Seriously? Did we just ate 20 plates of sushi and won plasters as our prize? I can’t even use the plasters without looking kiddy. Really don’t know if I should cry or laugh. 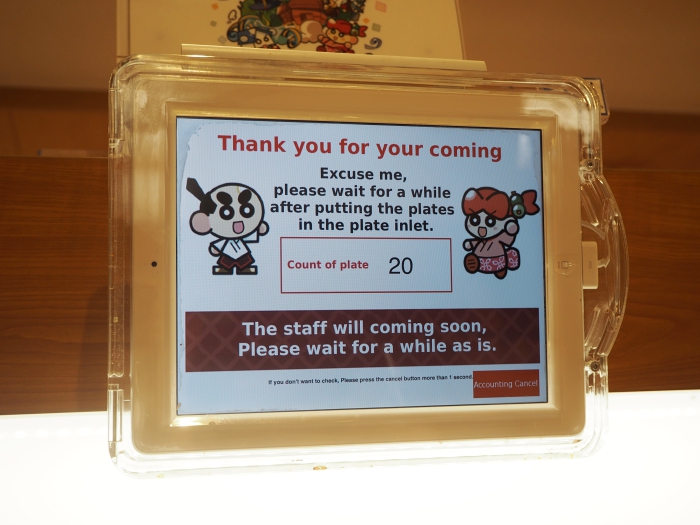 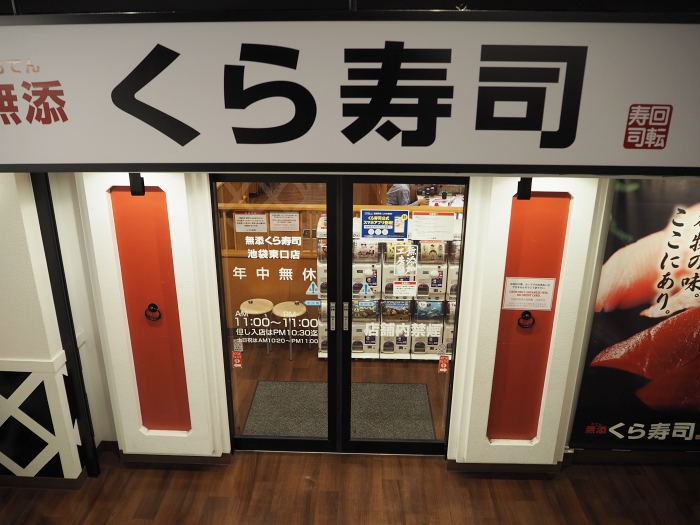 I have no idea what’s the name of the restaurant. While I did take a picture of the shop front, I can’t read the Japanese words. A quick google search tell me that the place is called Kura Sushi. They have several outlets and the one we went to is located at the basement level in one of the buildings near Ikebukuro Station.

We eventually left Shinjuku after dinner and went to the Don Quijote nearby our hotel for some last minute shopping. Then, I spent the rest of the night in the hotel packing my luagge, before I finally went to bed at 04:00.