Before I start on my next travelogues, I like to do a quick recap of Chinese New Year 2017, while the memories are still fresh on my mind.

To be completely honest, I’m not a huge fan of celebrating Chinese New Year. I mean I love the vibe and the Chinese New Year goodies, but I’m not exactly a big fan of dressing up and going for visiting. Maybe part of the reason is not having a close-knit group of relatives or cousins. (After coming back from all the visitings, I don’t think I even meet that many people this Chinese New Year.)

My family and I also made a spontaneous trip to Bangkok the weekend before Chinese New Year, and as such, I feel like Chinese New Year came sooner than expected. Everything was in a mad rush.

Despite having bought some new clothes beforehand, I still find myself doing last minute shopping on the eve of Chinese New Year. After being done with shopping, I’ve to rush home to get ready before meeting the fiancé at 16:00 for the first round of reunion dinner over at his place.

After that, we then head back to my place for a second round of reunion dinner with my family. Reunion dinner at my place is always a very simple affair. This year, we decided to stay at home to have steamboat using the Hai Di Lao tomato soup base that my sister bought. 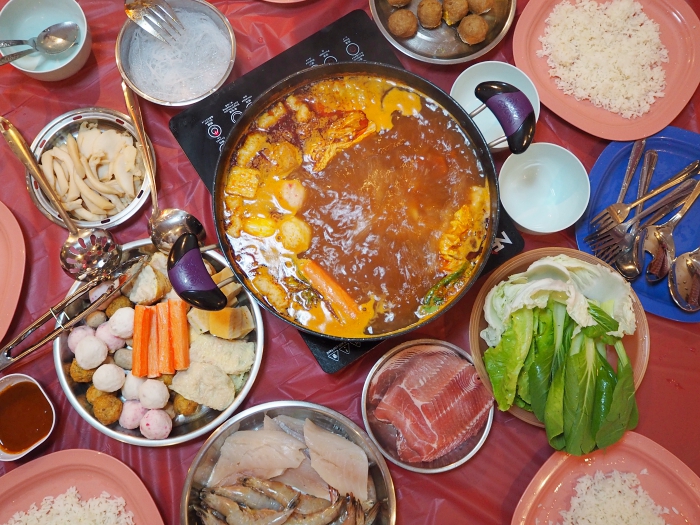 For as long as I can remember, since young, my dad would drive us to Chinatown at midnight for some last minute shopping on the eve/day of Chinese New Year. It sort of like a tradition for my family. It used to be just my dad, my elder sister and I. Then subsequently, the fiancé and my third sister started to join us on the trip. However this year, our family car actually broke down just days before Chinese New Year. Without a car, we ended up not going to Chinatown this year. Was a little sad because I’ve yet been to Chinatown this year! I’ve meant to go but was too busy throughout the days leading to Chinese New Year hence I didn’t get the chance to go.

Our Day 1 always started pretty late as compared to other families. I think it has to do with the fact that we always came home at the break of dawn after our trip to Chinatown. In the past when my grandparents are still around, they’ll always call and ask what time we are going down. Most of the time by the time we reached (usually in the afternoon), my aunt and cousins would have already come and left.

Then, ever since my grandparents passed away and my sister got married, Day 1 always started with us waiting at home for my sister and brother-in-law to come over. Thereafter, we would then head over to my second uncle’s place at Jurong East, before going over to my grandparents’ house at Bukit Ho Swee.

This year was slightly different, though. Instead of heading over to my grandparents’ house on the first day of Chinese New Year, my family decided to visit my aunt at Tampines instead. 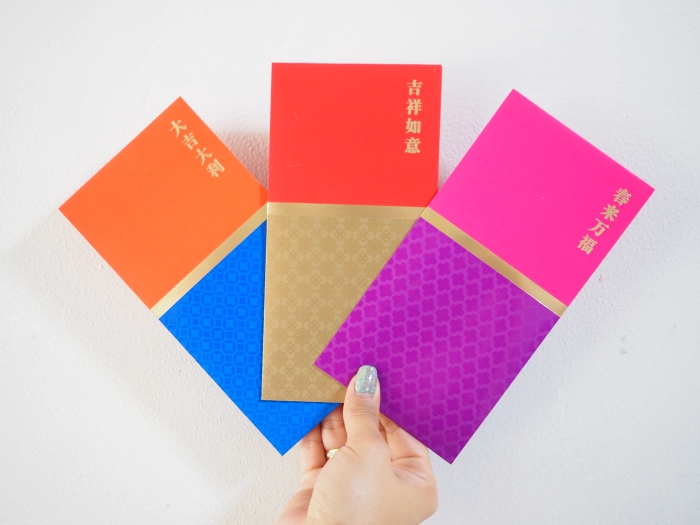 Pretty hong bao gifted by my elder sister. My other two sisters were looking forward to receiving an additional hong bao next year. They are looking at every opportunity to remind me that I’m getting married soon! First, it was my birthday, then now this. I think they secretly can’t wait for me to get married. 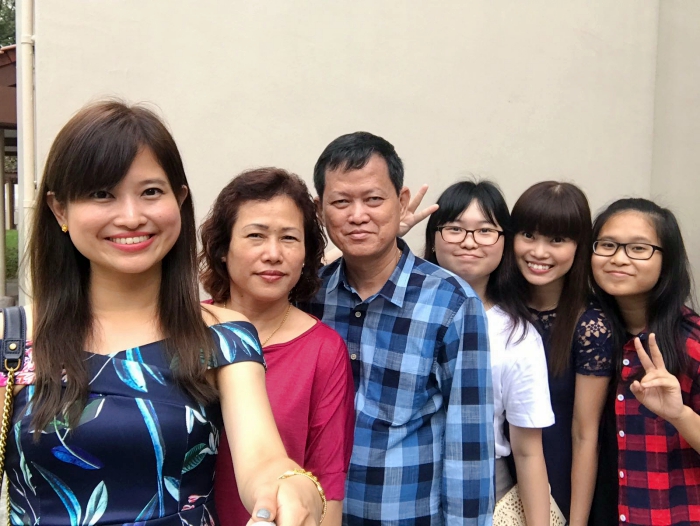 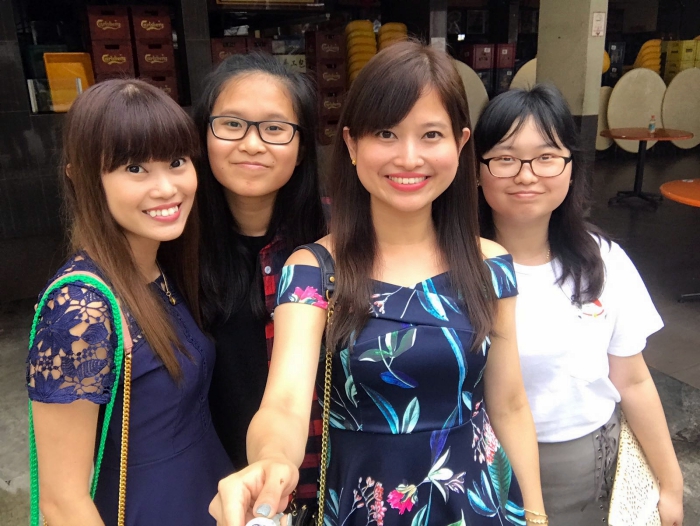 Selfie stick to the rescue! 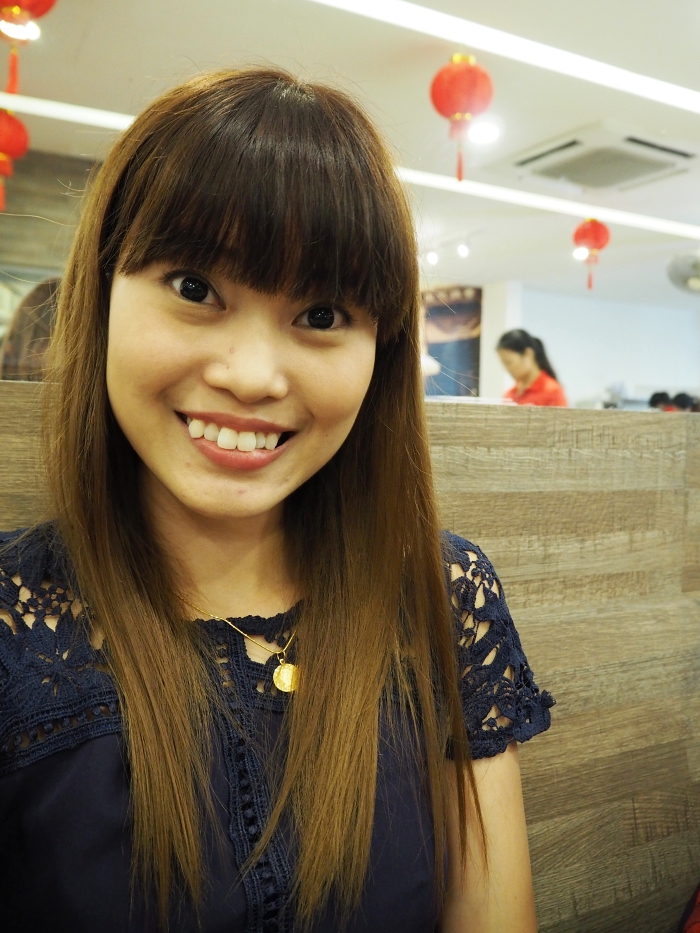 No one was there to help me snap my OOTD, so I got to make do with a selfie. I was wearing a new dress from Hollyhoque that I got the day before.

Not sure what are my lucky colours for the Year of Rooster but my outfits this Chinese New Year were mainly navy and forest green. 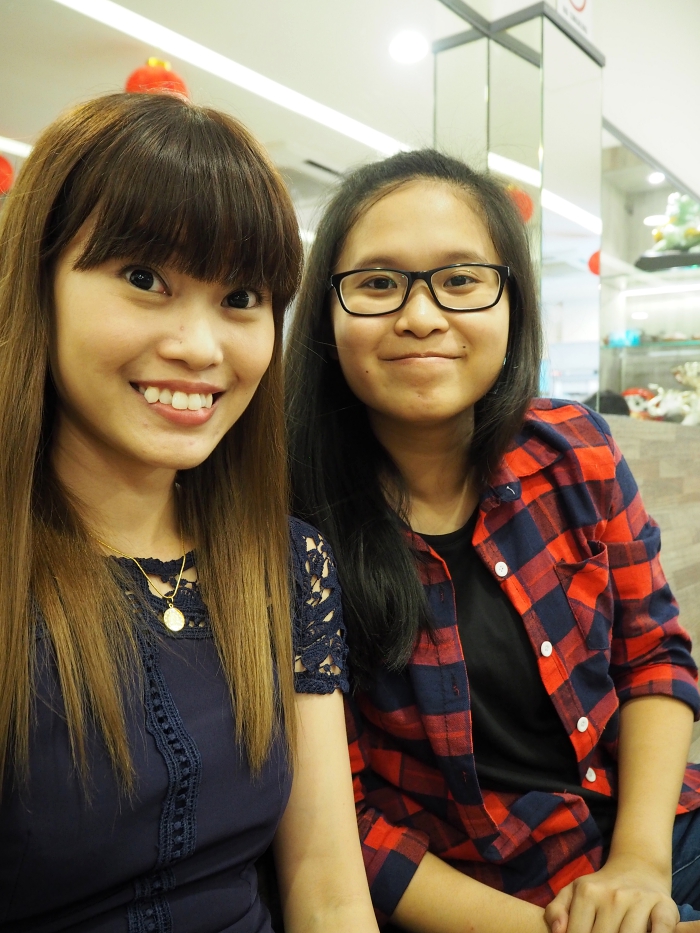 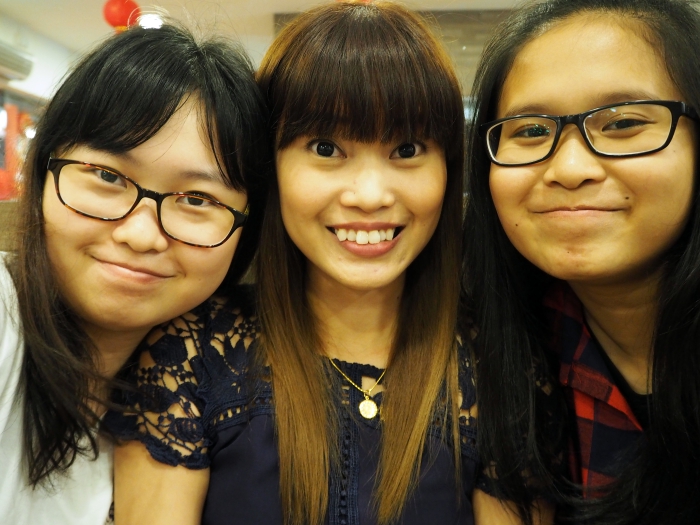 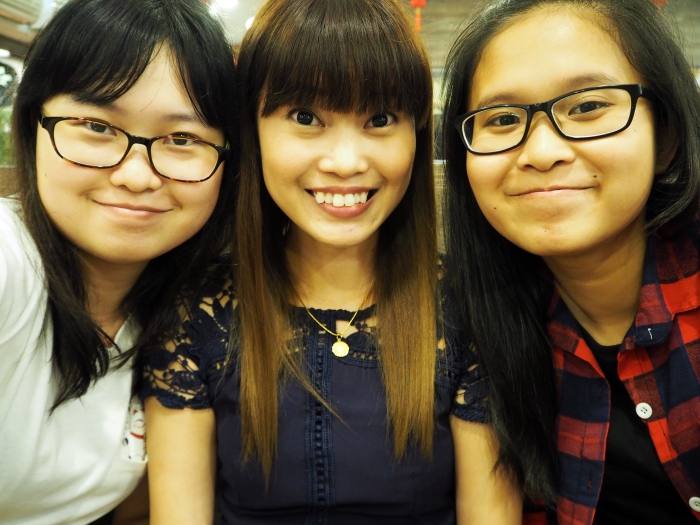 Dinner at 旺角 at Upper Bukit Timah Road, after we came back from Tampines. 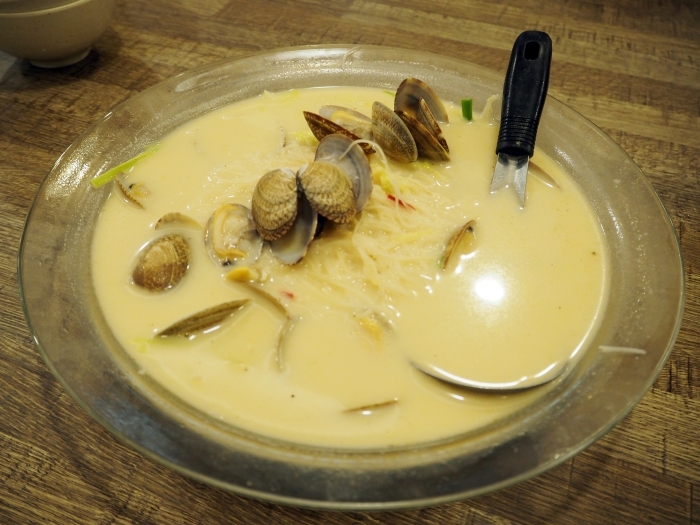 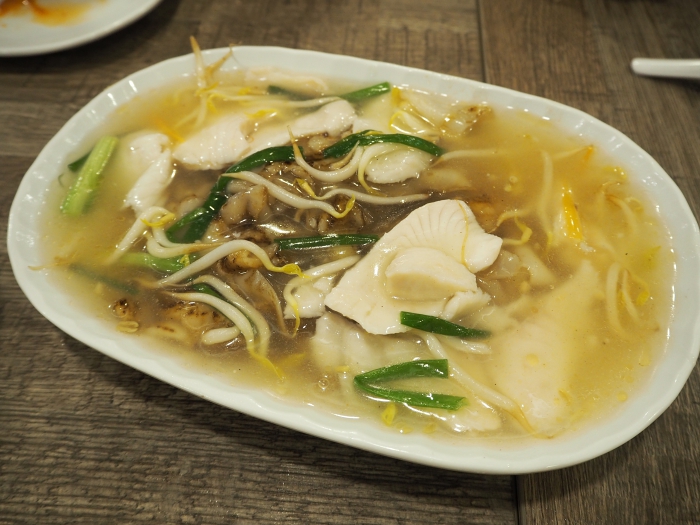 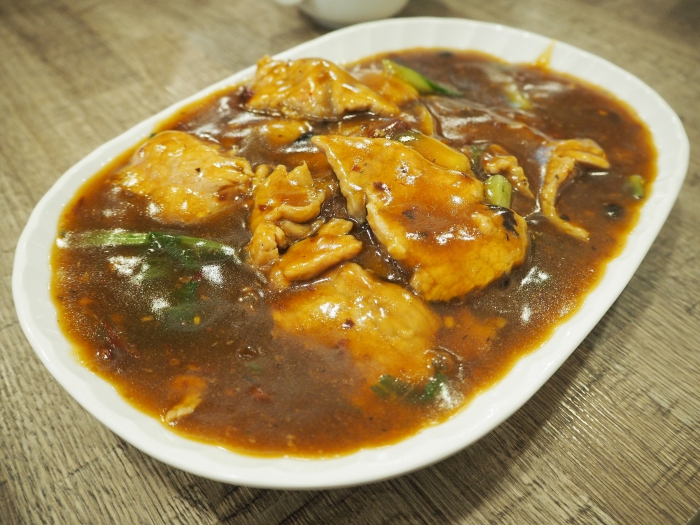 Food were pretty good and affordable since there was no GST and additional surcharge for Chinese New Year.

Went down to my grandparents’ house early in the morning because 29th January happened to be the 100th day since my uncle passed away. My godma prepared a table full of dishes for praying hence we were asked to go down on that day instead of Day 1. 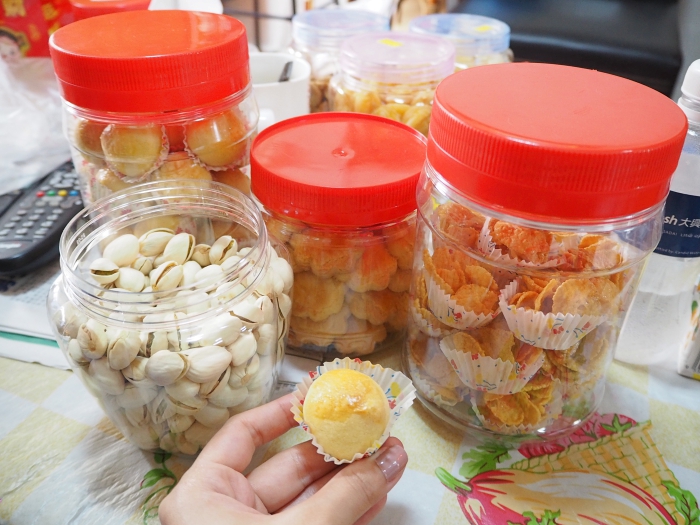 Stuffed ourselves silly with all the Chinese New Year goodies! My favourite this year is hands down the prawn roll from Bee Cheng Hiang! So much so that I got the fiancé to get me three bottles on the eve of Chinese New Year. However, my face had been acting up recently, so it’s probably not recommended to have too much salty food. Am trying my best to keep my hands off the prawn rolls. 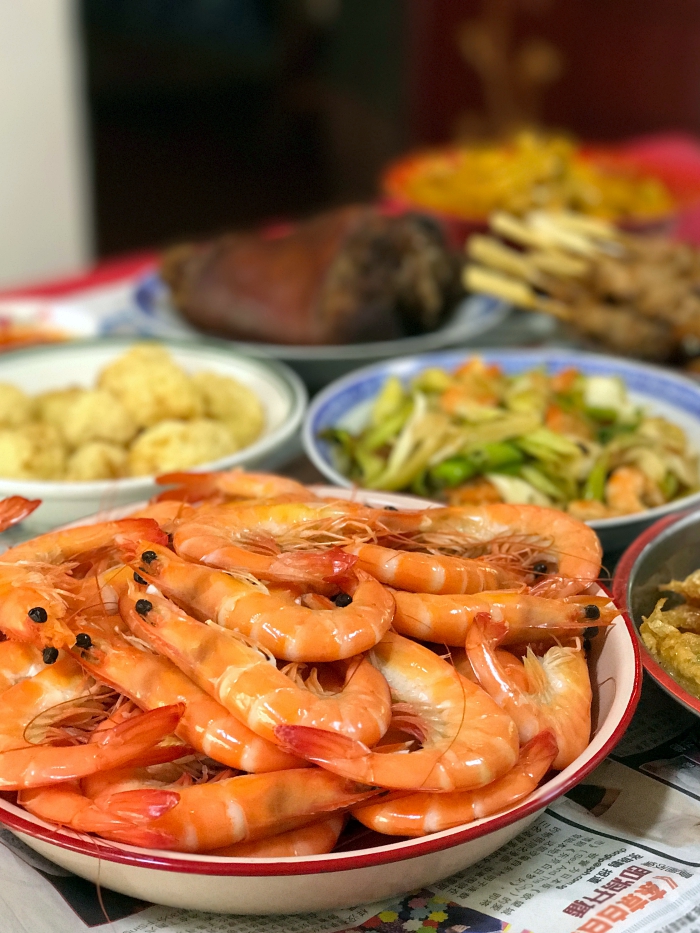 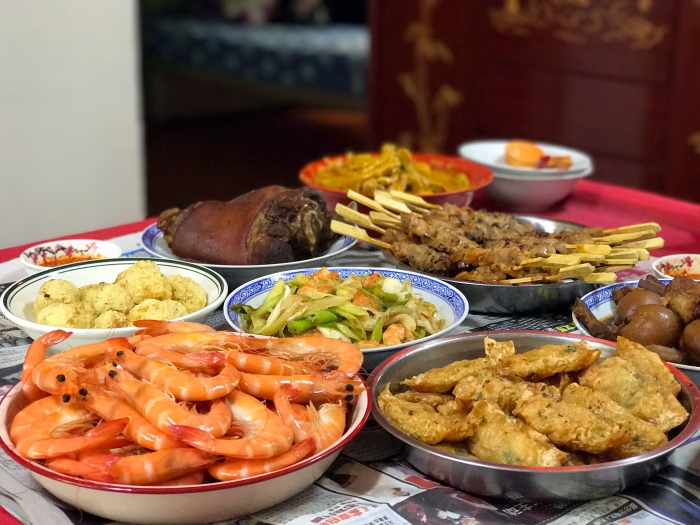 Shot using Portrait mode on iPhone 7 Plus. To be honest, I still can’t fully appreciate the camera on my new iPhone. It didn’t seem to be as impressive as I thought it should be.

Anyway, we had too much food that afternoon, especially since there weren’t that many people who turned up.

We eventually left my grandparents’ place at around four plus in the afternoon. Since we were home early, I decided to ask the fiancé to come over that night for visiting.

My turn to go visiting at the fiancé’s place. His mum was going out in the afternoon, so I made it a point to reach his place before 11:30. Continue to stay at his place till around 15:00, before making our way to a meeting at City Hall. So technically speaking, I started work on Day 3 of Chinese New Year when most people are still enjoying their Public Holiday. 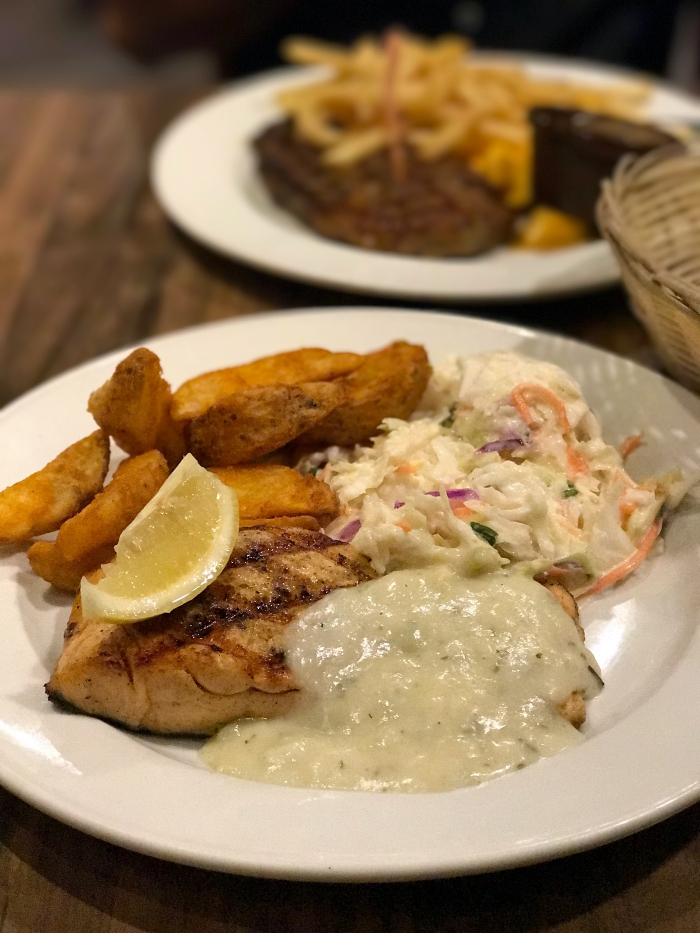 Dinner at Astons at Suntec City.

Day 4 happened to be my dad’s birthday. So while we all had to either work or go to school that day, we decided to meet up for a family dinner that night as a form of a birthday celebration for my dad. Decided to have Thai food at Bangkok Jam since we didn’t get to enjoy that many Thai food during our recent Bangkok trip. 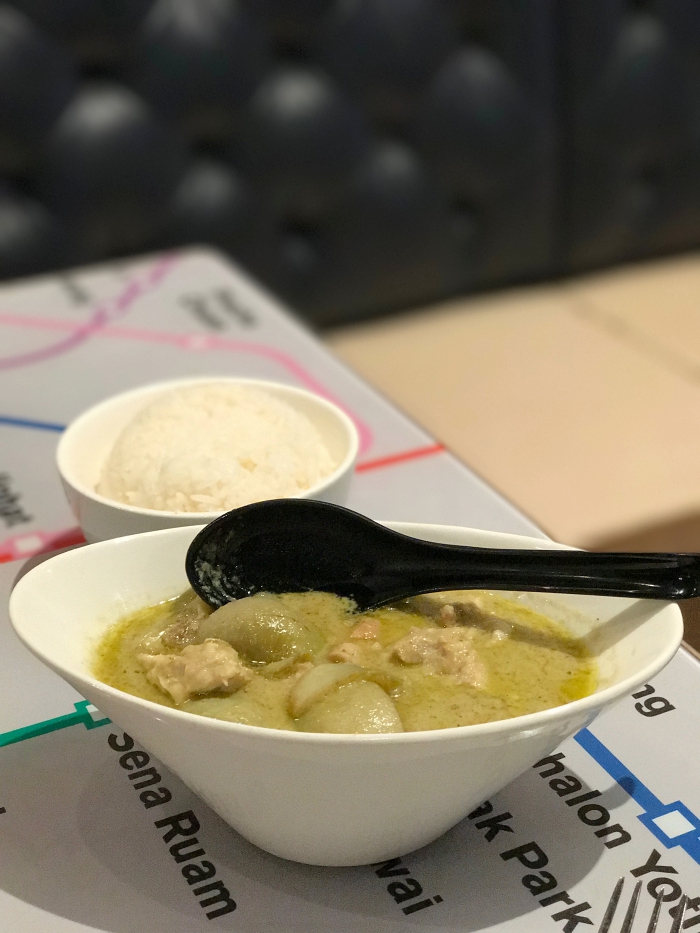 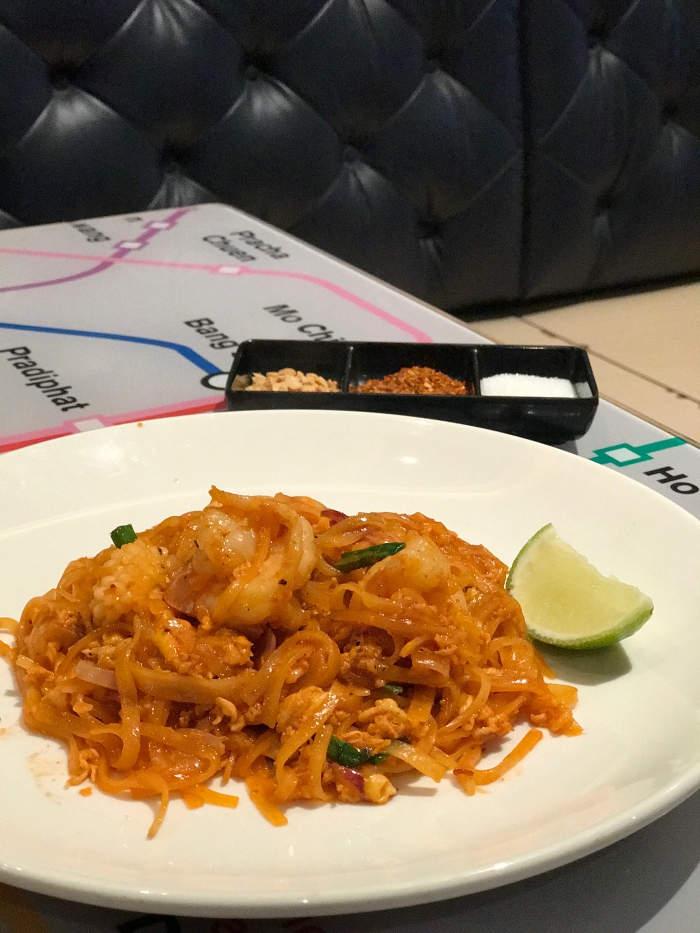 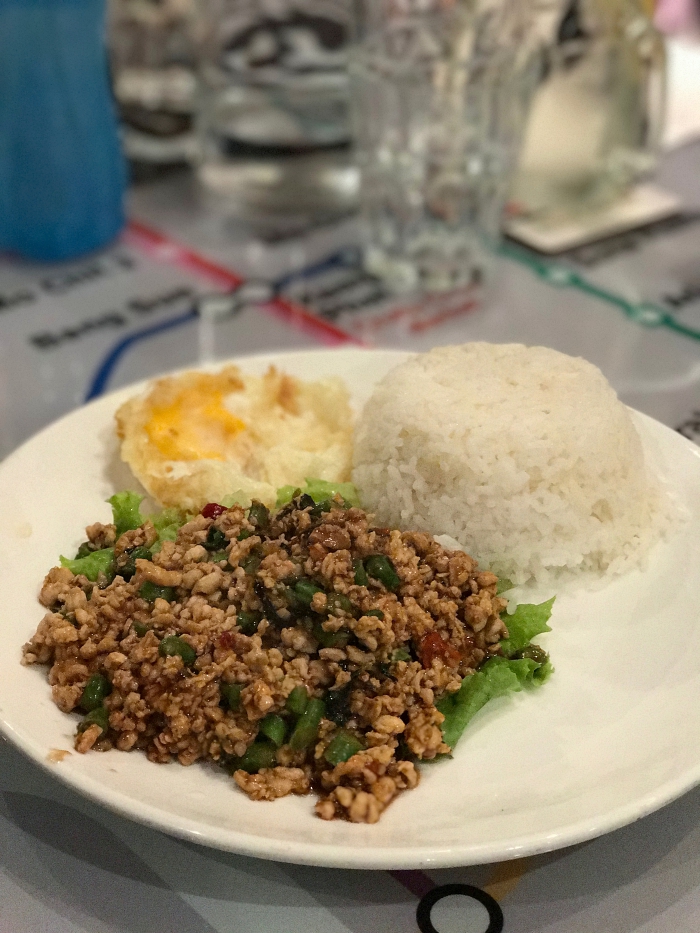 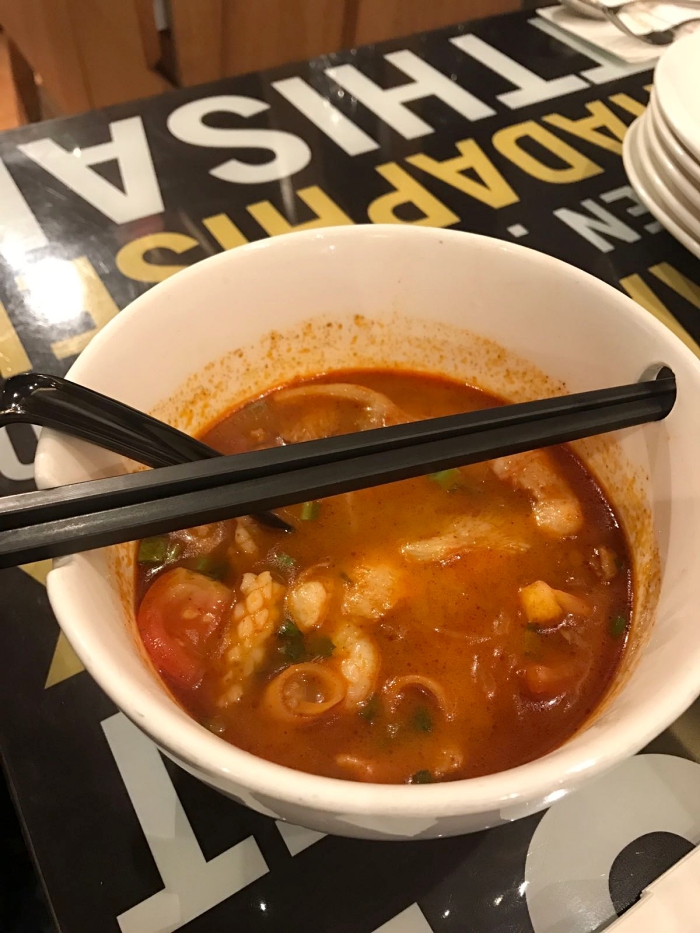 Made a reservation via the Eatigo app and got 40% off all food items on the menu (exclude drinks). The bill came up to almost the same amount as what we paid for at the Bangkok’s airport, but the food here were so much better! 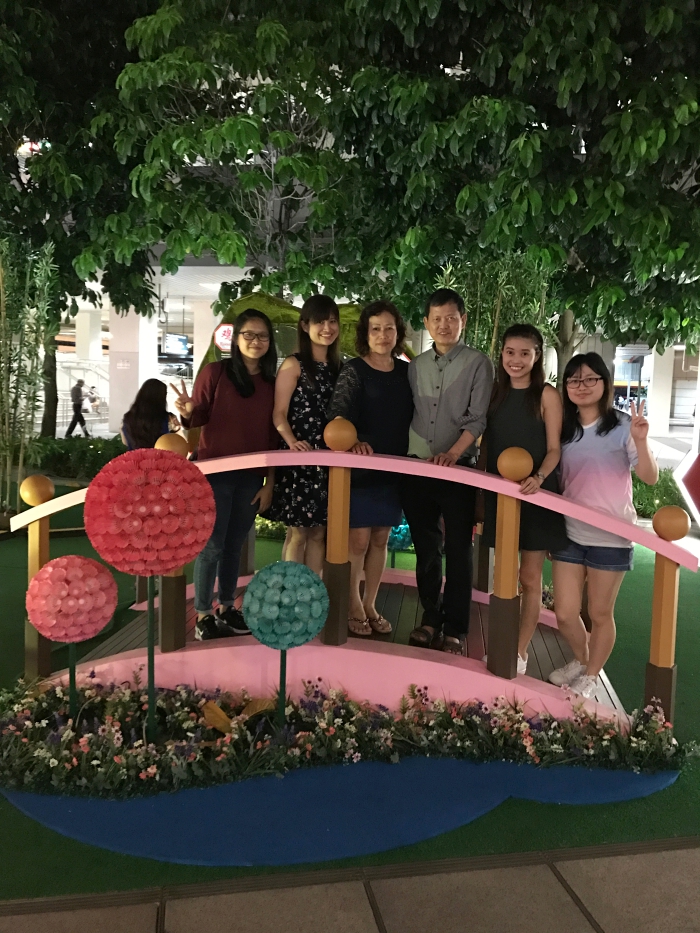 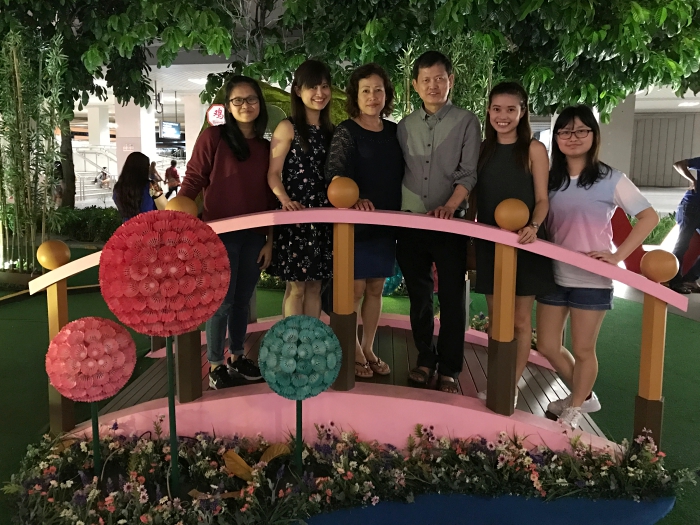 Seeing that the fiancé was off that day, we decided to meet up to have lunch and work together. Took a bus to town and my original plan was to have all day breakfast at Food For Thought. It has been a while since I last visited the place and little did I know they’ve moved. I was so disappointed when I realised the place had since been changed to Love Pal Cafe. 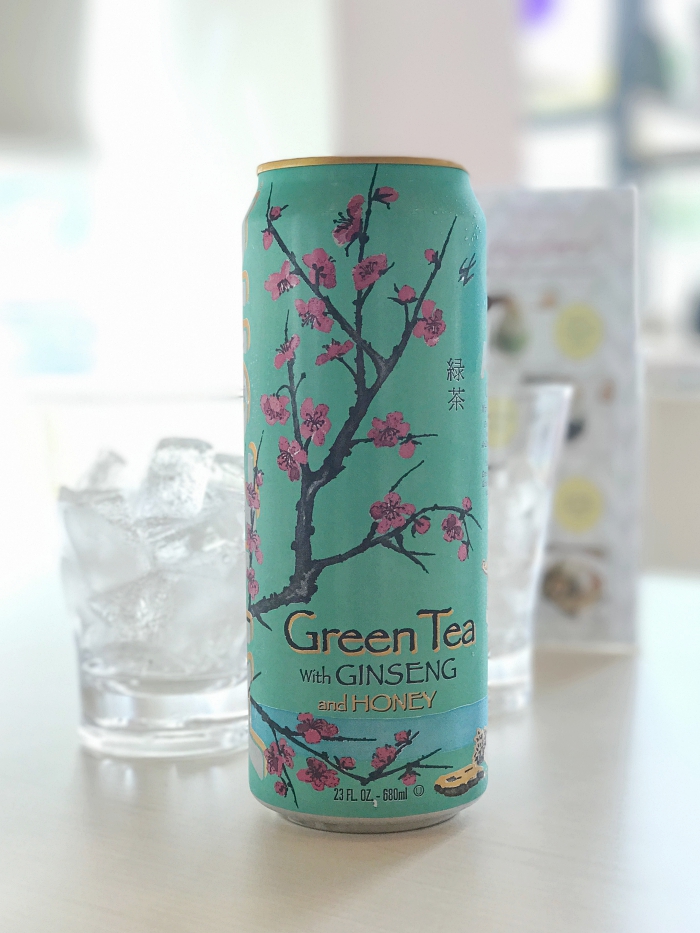 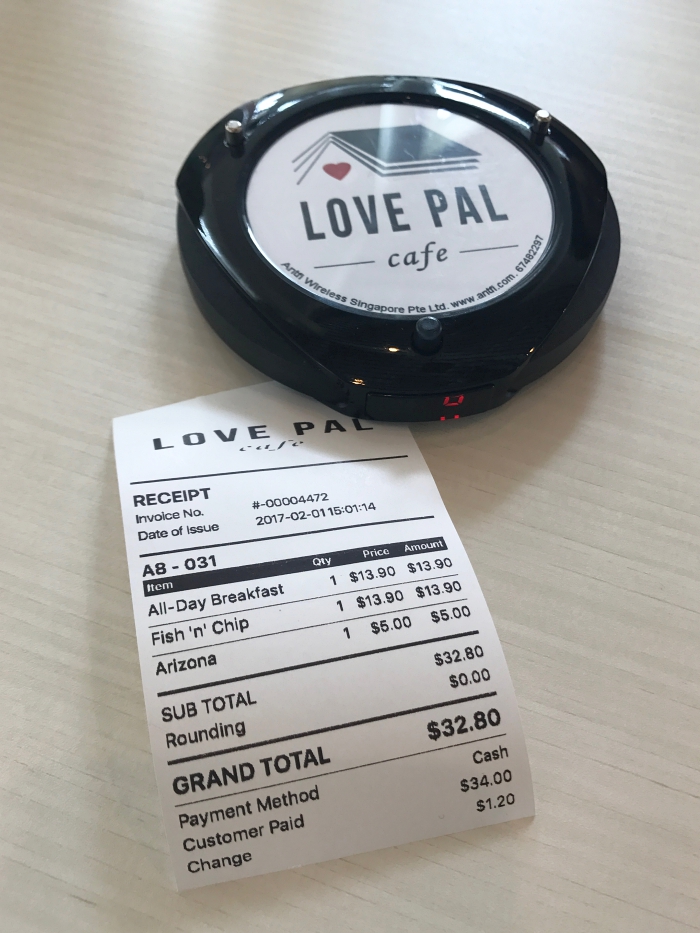 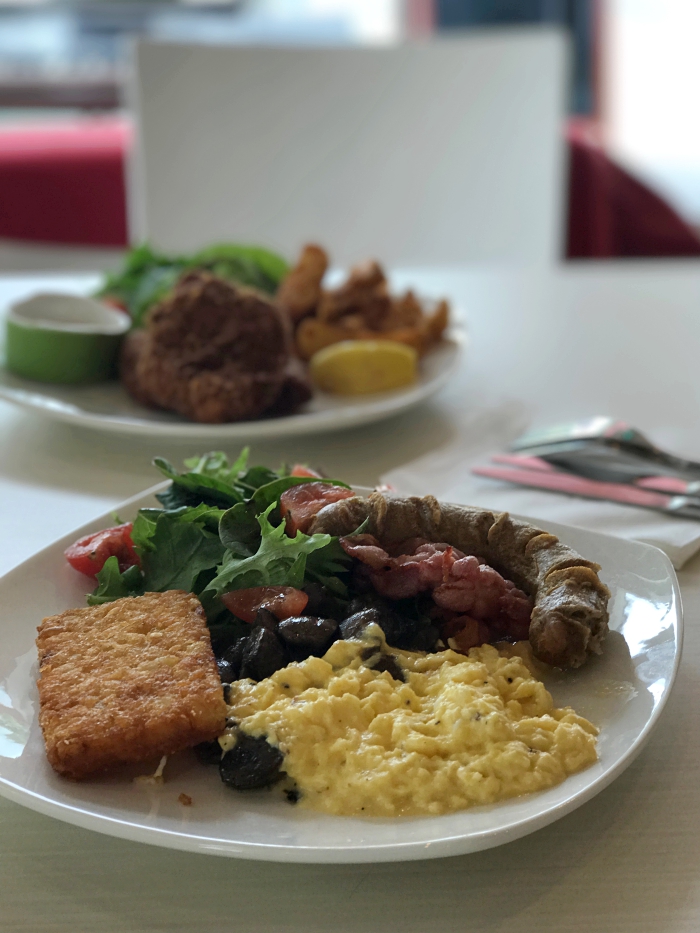 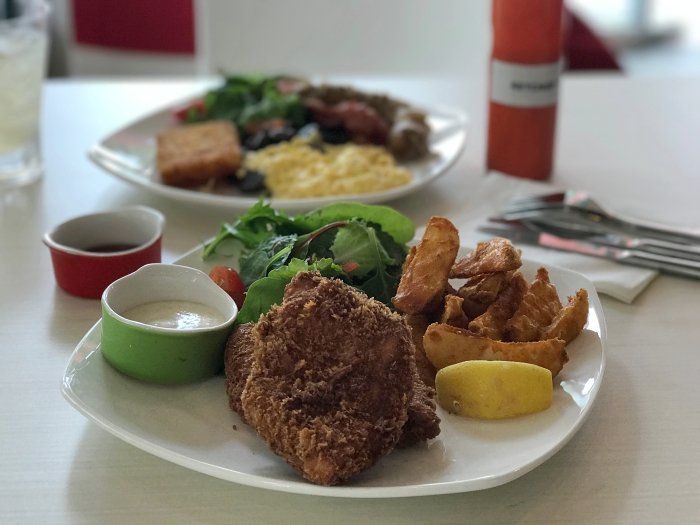 Still, we decided to dine there since we already made our way there and it will be too troublesome to look for another place to have our lunch.

The food was okay I supposed? It wasn’t exceptionally nice, but I guess it was considered passable for the price we paid. There wasn’t additional tax or service charge, so that was nice.

Okay! Think I’m going to end my post here since I didn’t have any pictures taken after Day 5. I guess one of the goals for this year is to try to take more pictures. Compared to the past, I think I’m taking significantly fewer photographs each year. Most of the pictures I took were those when I’m overseas. Even so, I wasn’t even present in half of the ones I had. A big bulk of them were scenery shots. If this continues, you will probably see less of me on this space.